Brought to you by The Meteorite Exchange, Inc. 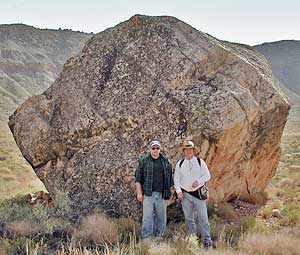 Jim (left) and Paul (right) on the floor of Meteor Crater

By 1996 we (Paul Harris and Jim Tobin) have already been friends for years. Already hunted meteorites together, prowled the desert for other rocks and fossils, been broken down and trapped in sand. After finding out that neither of us panic easily we decided to create a presence on the emerging World Wide Web.

Starting in 1996 with meteorite.com and the name The Meteorite Exchange, Inc. we began to build websites. Meteorite Times Magazine came along in April of 2002. In 2007, our original sales site for tektites and meteorites was replaced with the smooth easy to use online store we have today.  We finished our meteorite information site in 2010 and have just finished this site, The Meteorite Exchange Network to help match up meteorite buyers and sellers.

Still enthusiastic about meteorites and all things related to them, we hunt, collect, cut and prepare specimens. We travel to gem shows and enjoy meteorites as much now as in the beginning.  Please feel free to share any comments you have on this or any of our other sites.

Impacting The Meteorite World Since 1996

You can find out more about which cookies we are using or switch them off in settings.

This website uses cookies so that we can provide you with the best user experience possible. Cookie information is stored in your browser and performs functions such as recognising you when you return to our website and helping our team to understand which sections of the website you find most interesting and useful.

Strictly Necessary Cookie should be enabled at all times so that we can save your preferences for cookie settings.

If you disable this cookie, we will not be able to save your preferences. This means that every time you visit this website you will need to enable or disable cookies again.